Hugh Miller joined the City of San Antonio in July, 2004, after tenure at Priceline.com and the San Antonio Water System. He has spent most of his career in information technology leadership in several places throughout the country. Serving as the Chief Technology Officer and Director of the Information Technology Services Department (ITSD), Mr. Miller is responsible for providing information technology (IT) services to all City of San Antonio departments on a daily basis. ITSD also provides leadership, vision and support for all technology functions throughout the City organization.

Mr. Miller has overseen the redesigning and rebuilding of all the voice and data networks, most of the business systems, redundant datacenters and the IT service catalog. He worked with the City’s energy company to build a fiber optic wide area network spanning throughout San Antonio. Additionally, he and his staff helped the Library department deploy an award winning public wireless network that runs in all of the library branches and have deployed wireless throughout most City offices and the Riverwalk. He has helped ITSD begin implementing best practices through the utilization of Information Technology Infrastructure Library and by building a service-based technology organization.

On December 10, 2007, Hugh’s hard work and leadership was honored by being selected as one of Computerworld’s Premier 100 IT Leaders for 2008. Computerworld’s Premier 100 IT Leaders Awards Program honors executives who show exemplary technology leadership in resolving pressing business problems. Mr. Miller sits on several organizations’ advisory boards and has been asked to speak at many conferences throughout the US. Mr. Miller’s education includes, Electrical Engineering – University Of Texas at San Antonio, Computer Engineering – Iowa State University and Graduate courses – University Of Texas San Antonio 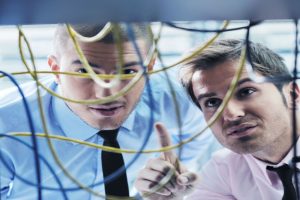 IT is no longer the monolith it once was. External business units are creating challenges for CIOs traditionally looking to put everything under one roof. But...