Edward Marx is Chief Information Officer at Cleveland Clinic, a $10 billion medical system that includes the main campus, 10 regional hospitals, 18 family health centers, and facilities in Florida, Nevada, Toronto, Abu Dhabi, and London. He is responsible for the development and execution of strategic planning and governance, driving optimal resource utilization, and team development and organizational support.

Ultimately, he will develop leaders and leverage digital healthcare technologies to enable superior business and clinical outcomes. Prior to joining Cleveland Clinic, Edward served as CIO of several health systems in Texas, New York, Colorado, and Ohio. Edward began his healthcare service as a janitor while in high school where his commitment to patient care began.

He later served as an anesthesia technician before transitioning to the information technology field. Concurrent with his healthcare career, Edward served as an Army combat medic before becoming a combat engineer officer. Edward is married to Simran and they have five children and three grandchildren. A member of Team USA Triathlon, he attempts to stay healthy through competitive cycling and running. 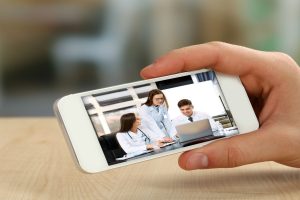 Mobility presumably offers advantages in delivering healthcare, and so investments have been made to improve it. What has been the result? Have the investments...